​Art in the A.M. is a monthly performance featuring visual artists, RBWG writers, and songs by musician Stuart Vining. While we are not meeting face-to-face during the pandemic, we invite you to join us in celebrating the third anniversary of Art in the A.M.
​Second Performance July 2020—Mixed Media Artist Susan Frey
Early in her artistic career, Susan Frey spent many hours in New York City's art museums. She attended the School of Visual Arts and later SUNY at Farmingdale, earning a degree in advertising art and design. In the Big Apple, she worked at three different advertising firms until she made family life a priority. Keeping up her love of art she free-lanced and attended art classes. Community art associations needed volunteers and board members, so Susan joined three and four at a time, winning many awards along the way.

In the summer of 2017, her solo show "Creatures" was displayed at Camp Rehoboth. In the summer of 2018, another solo exhibit "Balancing Acts" was displayed at the Rehoboth Art League. She also participated in an abstract show at the Peninsula Gallery in Lewes. Some pieces can be seen today at Camp Rehoboth, the Rehoboth Art League, the Mispillion Art Association in Milford, and five pieces in the Blue Moon restaurant in downtown Rehoboth Beach.

Susan continues to paint and work in mixed media. In her studio rock, jazz, and blues music sets the mood. Curious images evolve on the canvas. Objects are suspended between the real and imagined world. Brushstrokes, lines, marks, and colorful shapes eventually produce a finished piece.

You can find Susan on Facebook: Susan Frey Visual Artist.

Artwork by Susan Frey
Title: Jack's Song
© 2020 Susan Frey. Photos may not be used or altered in any way. 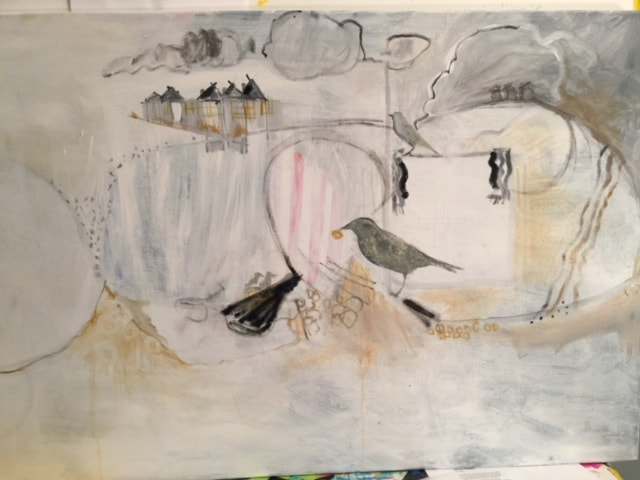 Stage 1—"I started my artwork by painting over an existing painting..." 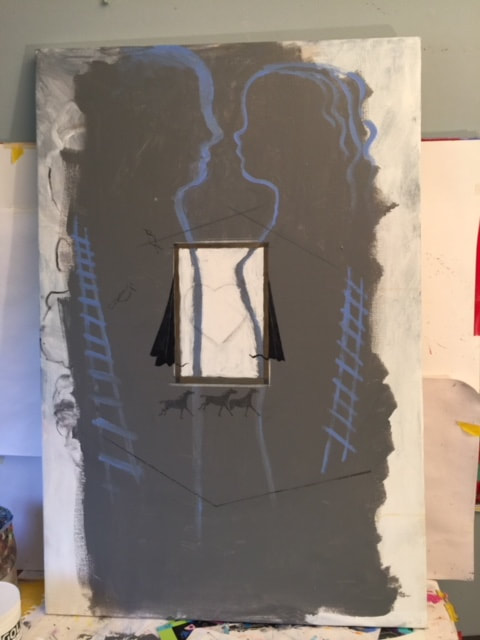 Stage 2—"Turning the canvas vertically (easy enough!), worked out better...I painted an outline of two silhouettes, a man and a woman facing each other." 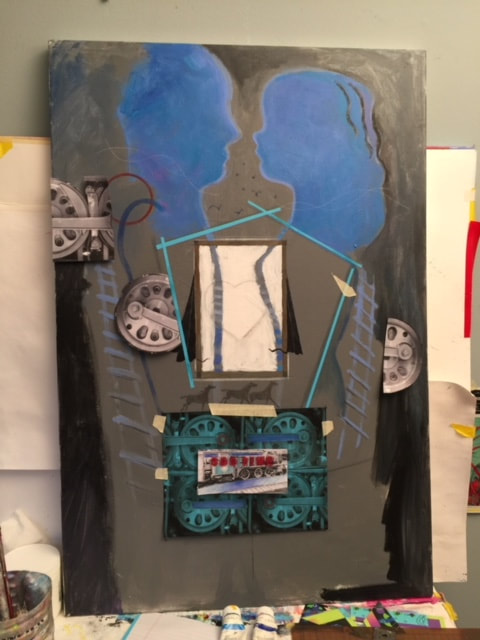 Stage 3—"The white room’s rectangle, with black curtains was next." 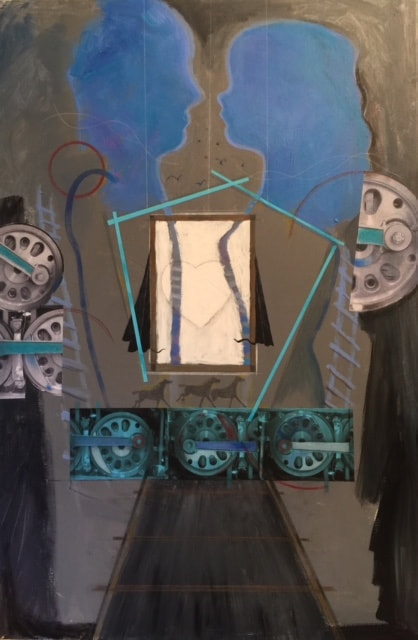 Final Artwork—"The wide railroad tracks were the last images added to the bottom of the work."
First Performance June 2020—Photographer Randy Roberts
Randy Roberts is an avid photo hobbyist who has an absolute love of the outdoors. Whether shooting nature and wild animals with brilliant colors or shooting people on the street in black and white, Randy feels at home behind the lens of his camera. He also loves making each photo special by manufacturing custom frames.  Randy’s work has been in Delaware Beach Life several times and he was honored with the cover photograph for the August 2017 issue. He also received first place in the annual Delaware Beach Life Photography Contest--People Category for 2018. This work was highlighted in their October 2018 issue. Randy’s favorite demonstration of his work has taken place during the Art in the A.M. feature of the Rehoboth Beach Writers Guild, where he says it is a treat for him to hear what stories his work inspires.

To find Randy’s work and details, go to randyroberts.com 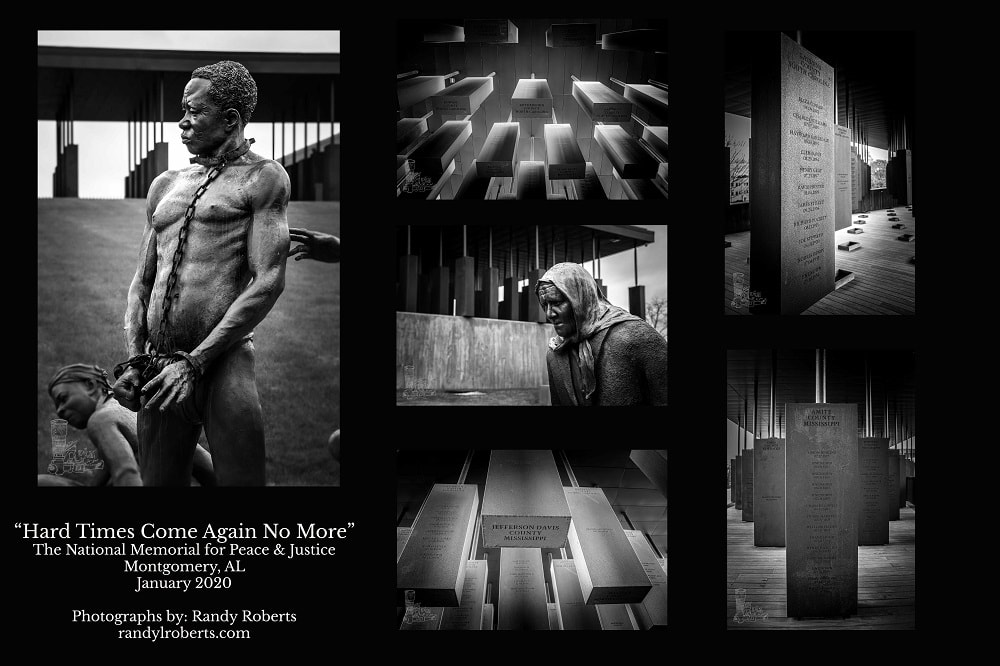 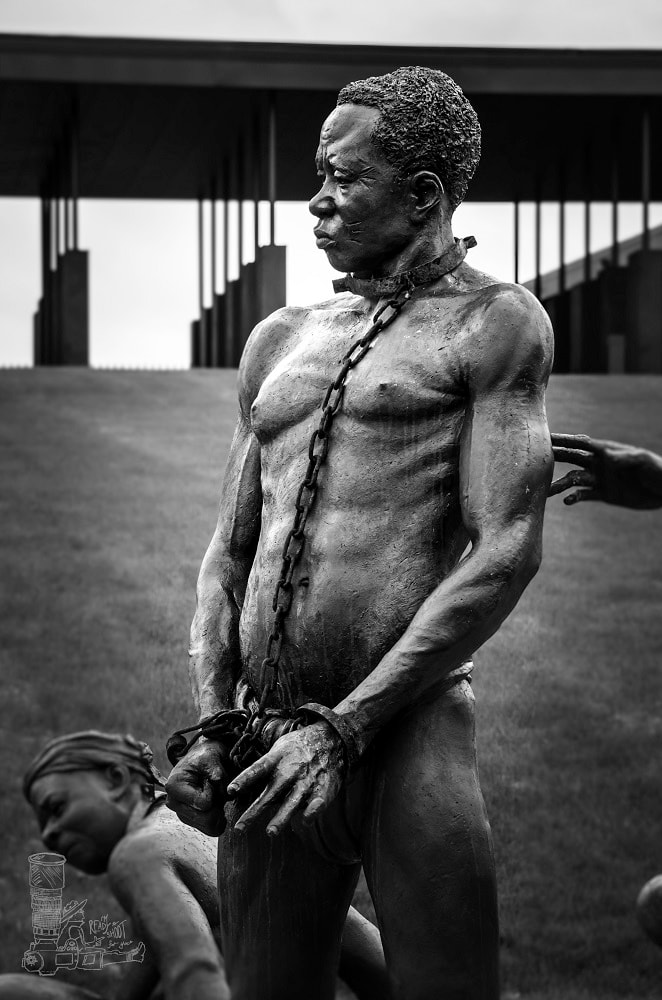 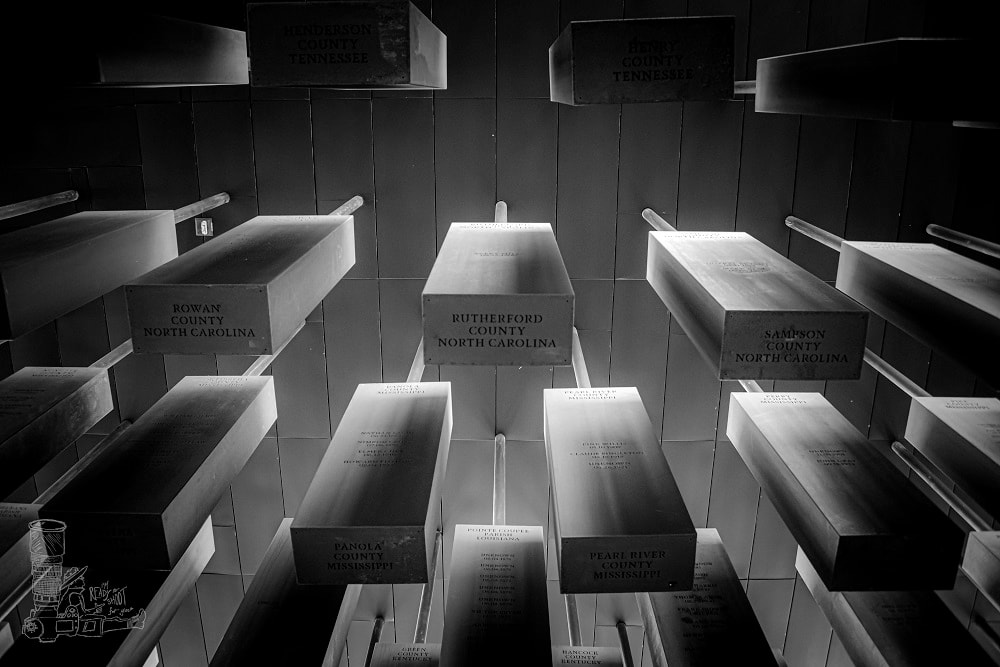 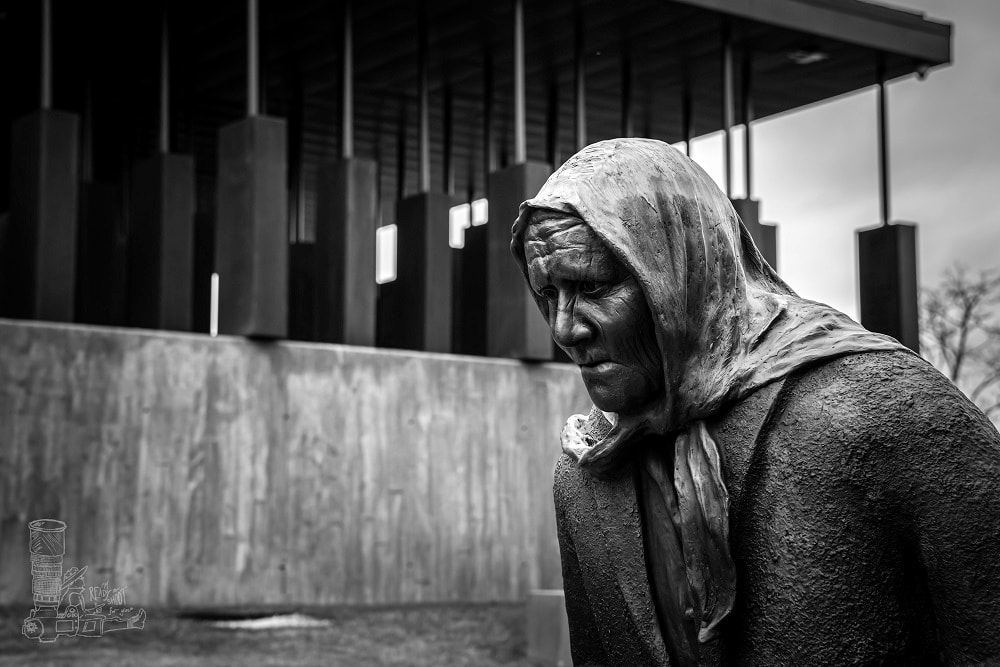 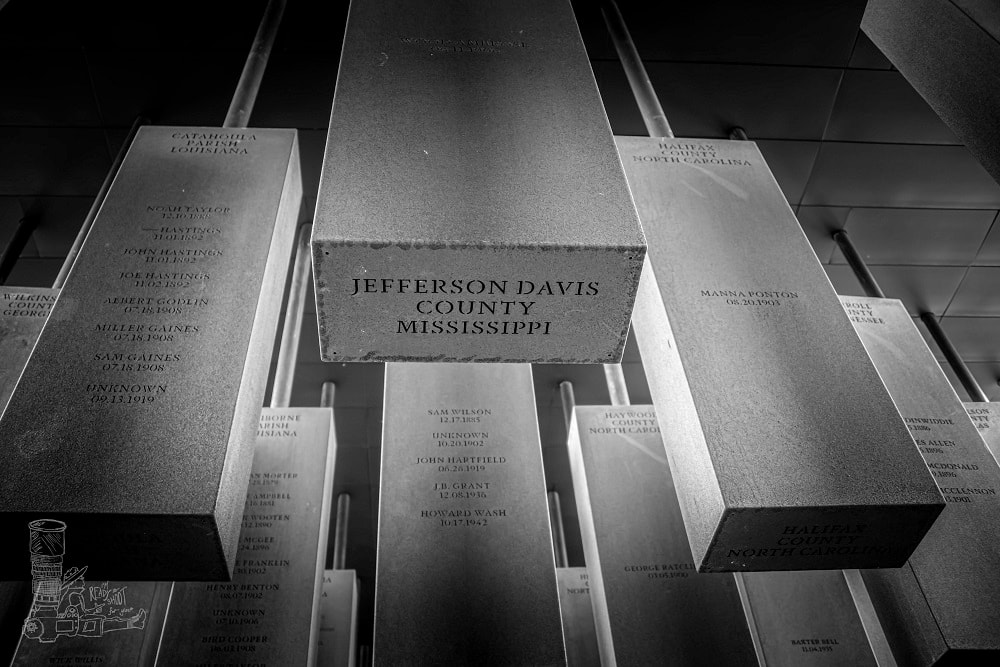 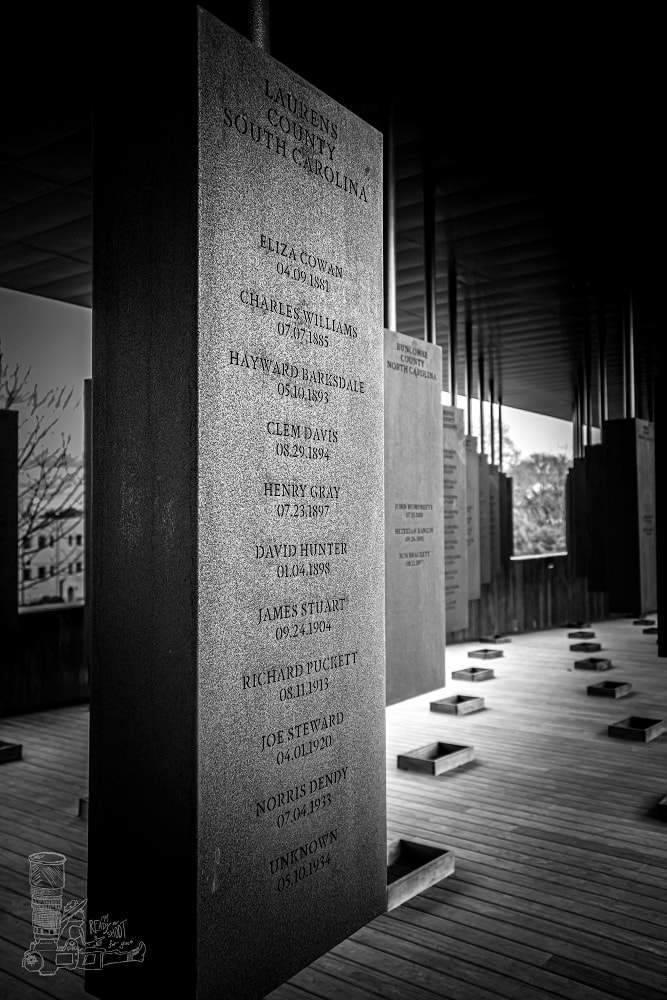 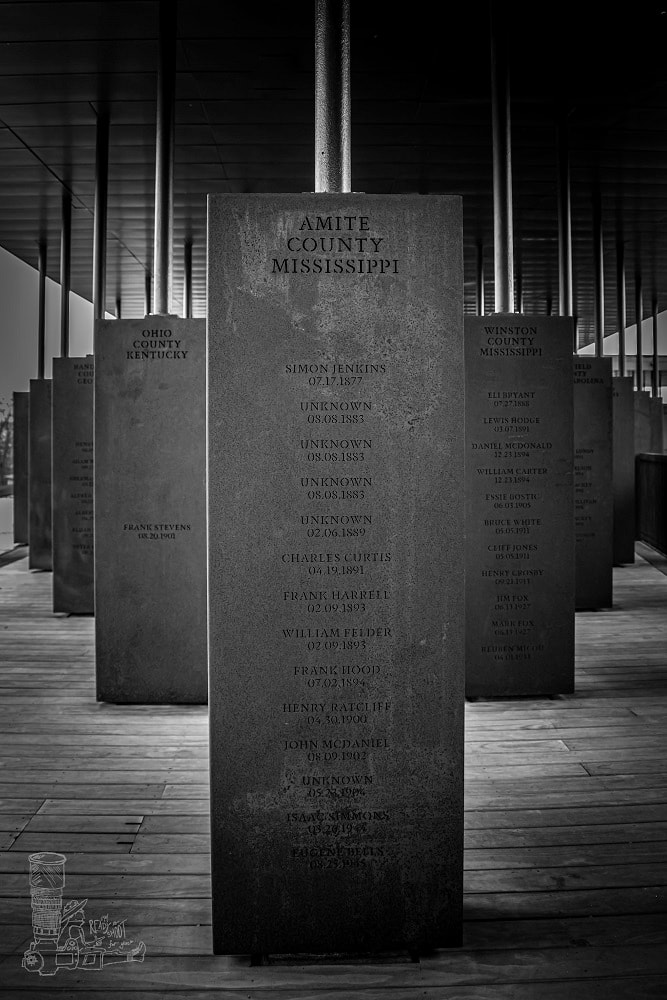