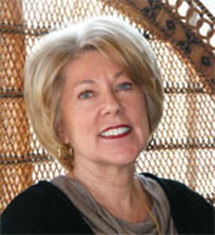 Gail Braune Comorat is a founding member of Rehoboth Beach Writers Guild, author of Phases of the Moon (Finishing Line Press) and a collaborating poet for Walking the Sunken Boards (Pond Road Press). Her work has appeared in Gargoyle, Grist, Mudfish, Philadelphia Stories, and The Widows’ Handbook. She’s a long-time member of several writing groups in Lewes, Delaware.
​
Here’s what you said about Gail’s class
At the first meeting of the Experiments in Poetry class at the end of July, we were asked to ponder the question, “What is poetry?”  And as we soon discovered, there was not one answer but possibly a thousand.

Under the sterling leadership of Gail Comorat and Ethan Joella, we experimented with forms we had never tried before, such as prose poems, fragment poems, and poems mapped from other poems.  Gail and Ethan provided us with a myriad of anchor poems that we could use during the week as we composed our own pieces.  The eight class members included seasoned writers, writers with little or no experience with poetry, and a few who had not picked up a pen in years but were eager to jump back into the world of writing.

One of the highlights of the class was the fact that Gail and Ethan, accomplished writers themselves, never came across as the experts there to show us the way.  Rather, they experimented along with us, crafting their poems and sharing them at every class.  I, for one, felt totally comfortable in this atmosphere, which came to resemble a group of people who loved to write gathered around a kitchen table.  Everyone was supportive of the other writers, and we listened and commented respectfully and energetically.
​
This class stands out for me as the best poetry class I have ever taken.  I was able to write a poem that had been smoldering in me for 40 years.  I was able to use the poem mapping exercise to revise a poem that had never sounded just right and now has been shifted to my “finished” pile.  I learned dozens of techniques and approaches.  I met some wonderful, warm writers.  My sometimes shaky goal to become a better poet was bolstered and reconfirmed.—Ellen Collins